This recipe reads a little like a list of keywords for Country Living- chickpeas, quinoa, AGA, lamb shanks, apricots, ginger wine, Le Creuset- but I make no apologies. Partly because I apologise too much, and my therapist would like me not to, and partly because it may be middle-class, but it is also cheap, easy and incredibly tasty.

It is also, incredibly, not horrendously bad for you. Quinoa is one of those things, like celery, that I once heard had zero calories, and I persist in believing it despite all evidence to the contrary. Like kale, I resisted quinoa for a long time, because Pinterest, but also like kale it turns out to be remarkably delicious. It’s sort of nutty, and rough, and couscousy, and absorbs like a motherfucker. I flung it in because I accidentally made it too sweet, and it worked wonders. I think it may be the white vinegar of cooking: immediate cure-all for all manner of fuck ups.

Anyway, it’s gorgeous, and very pretty when served, and you can leave it on low while you go a-walking, and tastes all rough and ready and subtle-sweet hearty. It’s a nice thing to have for Easter instead of spring lamb, and cheaper too, I expect. Part casserole, part pretendy tagine, part stew. Top. 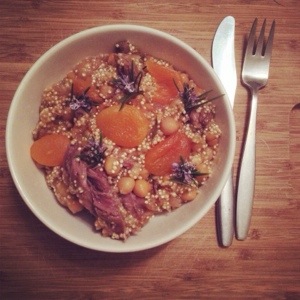 Butter
Two onions
Two good-sized sharp apples
Four biggish cloves of garlic
Thumb of ginger
Two glasses of ginger wine
One glass of cider
Two lamb shanks
Fistful of dried apricots
Fistful of fresh rosemary
Cider vinegar
The darkest sugar you can get your hands on- molasses is top.
500g cooked chickpeas- if you are buying canned, I have found that the cheaper the better. Honestly.
Some quinoa. I think we used about half a packet, but it honestly depends on the state your casserole-thing is in when you get it out of the oven.

Take your apples, your onions, your garlic and your ginger. Peel and grate the ginger, peel and chop the garlic, peel and chop the onions. The word “peel” is losing all meaning by this point (did you know there’s a word for this?), but thankfully, the apples don’t need peeling, only chopping roughly.

Take your pot, and set it on a good low heat. Butter liberallyish- I am, as the Irish lady said, “an awful cunt for the butter”, but this honestly doesn’t need too much. Just a nice wedge, and that’s all the fat it needs, because the lamb shanks dissolve so beautifully into everything else. 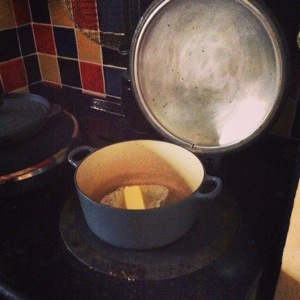 Chuck the shanks into brown- you can dredge them in seasoned flour, if you can be bothered- I couldn’t, but if I could, I would have done flour, a little molasses sugar, and mustard powder. Anyway, brown the shanks, and add the onions, apple, garlic and ginger, soffrito-style. Strip the rosemary, and put that in too.

Throw in the chickpeas (drained first), a pinch of molasses sugar, and splash over the wine, cider, wine. The lamb shanks ought to be covered, but I found that I couldn’t sacrifice that much ginger wine. You do you, but it will almost certainly be fine. Add the liquid, and a splash of cider vinegar. Fistful of dried apricots, halved. Cover, and leave on a medium heat for fifteen-ish minutes. Pre-heat your oven to something like 120 degrees, if you are a normal person without an AGA, and whack in the casserole dish. Leave it for as long as humanly possible. Four hours? Five hours? The longer you leave it, the more beautifully integrated everything will be, the more soft and yielding the lamb shanks. 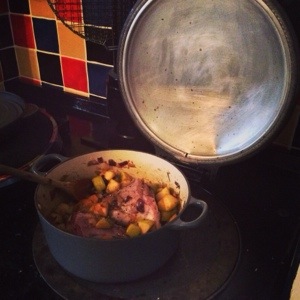 Anyway, approximately half an hour before you wish to eat, bring the casserole back to the hob. Taste it. Add salt, and pepper, or whatever, to taste. You should have plenty of liquid left, but if not, add a good glug more of cider or ginger wine. Even water would probably do. Bring the whole pot up to bubbling, add your quinoa, and cover for ten minutes. You may have to stir it to stop it sticking (this, you may have noticed, is not the conventional way to do quinoa, but it does work), but try and keep it covered.

After ten minutes, pull it off the heat, and let it sit until the quinoa has absorbed the liquid. This works just like magic, and it’s rather lovely. It took our quinoa about fifteen minutes to absorb everything, but it really was worth waiting. While you’re waiting, you might chop some more apricots. I have been trying to get apricots into a tagine thing since a dream of a meal in Greece one summer holiday: duck and apricots, and chips. Not especially Greek, but completely gorgeous. Chop the apricots, strip some rosemary flowers from the stems, take the lid off the pot, chuck in the apricots and give everything a good stir, to ensure it’s all evenly distributed.

Spoon generously into bowls, and decorate (rather fussily) with the little purple flowers. I am a sucker for rosemary flowers, and they do look very lovely against the orange of the apricots and the sweet dun colour of slow-cooked meat and old grain.

You shouldn’t need anything to go with this- it’s a meal in itself, one pot and minimal washing up, which is always a key factor in deciding on dinner. 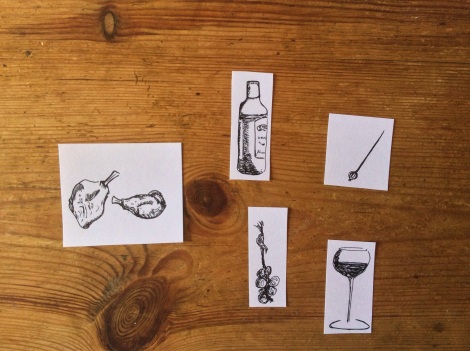 3 responses to “A Most Middle Class Casserole”