I am very slowly remembering how to cook.

I am very slowly trying to organise my life again; to clean the kitchen and hang out laundry and get to bed on time. I am writing this from my bed. I am going to go to sleep shortly, but before I did, I wanted to write this down. It isn’t much. It isn’t as fluent or as easy as it used to be; it isn’t anything like it used to be. But it’s something. I don’t know if anyone will even read this; it’s not as if I’m much of a blogger any more. Hello, if you are. Thank you.

I’m sorry it’s not more, but call it a way-marker, or a stone on a cairn; call it a mile-stone. A landmark. Something to show I passed by here, once upon a time, and that I might come back. I would like to. I don’t know if this is just an epilogue, or whether it might be a new start. I can’t really tell. I only know that this soup is a good soup. It’s a bottom of the fridge soup, a soup for cleaning away winter; a soup for the last of the chilly nights before you fold away your flannel pyjamas and find yourself thinking about bright spring colours, about lime and coriander and slivers of green and ginger.

I am thinking about spring, and some days I think we’re there. But other nights I still feel winter coming after me, and want soup. Here it is. 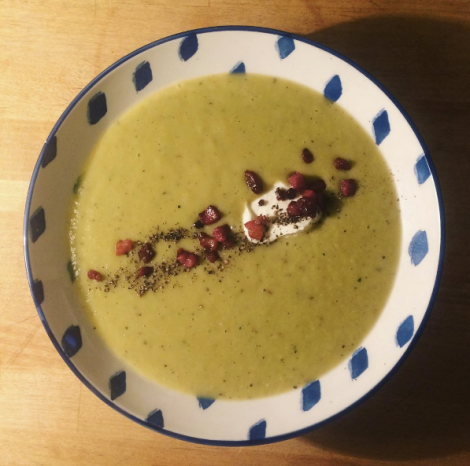 Three leeks
Two white onions
Three fat cloves of garlic
One big old potato
An unwaxed* lemon
A Parmesan rind (or one of those lumps of Parmesan that has been in the fridge so long it shatters when you put the knife in)
About a pint and a half of stock (I used chicken)
Nutmeg; black pepper.

Set a big pot on a medium flame, and add a little fat: a sliver of butter and a splash of olive oil. There’s some kind of alchemy with different kinds of fat: a sort of holy trinity of butter and oil and the rendered pancetta works beautifully for depth and oomph and subtlety.

That’s what we’re doing here: partly the pancetta is for a garnish, and partly it’s for that lovely white fat.

Add the pancetta now, and cook ’til crispy: tender and salty and good.

Take the crispy pancetta out with a slotted spoon, leaving the fat behind in the pan, and put to one side.

Peel and chop the onions. Start with the onions: you know about onions. Rough dice. Easy.

Take the leeks, and slice them lengthways. Take off the toughest green outer skin, perhaps two layers, if they have been in the fridge a long time. Chop roughly into half-moons, and press apart into the colander. Wash properly under the cold tap, because leeks hold dirt like nobody’s business. Shake them dry, and add them, too. Stir. Don’t let them catch.

Peel the garlic, and grate it into the pan. You could chop it, I suppose, but I’ve got out of the habit: it’s quicker to grate, and I don’t mind washing up the grater. Stir again. Really, really don’t let it catch.

While you still have the grater in hand, take the lemon. (I write “unwaxed” because it’s simpler, but you can de-wax a waxed lemon by washing it with very hot water, Fairy liquid and a scrubbing brush.) Grate a little less than half of the zest into the pan, and stir again.

Grate in a little nutmeg; twist in some black pepper.

Peel the potato, and dice it fine. The finer you dice, the quicker it will cook; so you can be lazy or you can be hungry. (Cut out any eyes or sprouts: this is a very old potato.)

Add the potato to the pan, and pour over the stock. Throw in the old piece of Parmesan, and the leaves from one sprig of thyme. Simmer until everything is tender: about ten minutes.

Blitz with the hand blender (yes, even with the potato: it works, in a kind of rich, creamy way), drizzling in a little olive oil as you do. This makes it glossy.

Ladle into bowls; dollop on the creme fraiche; a scatter of crispy pancetta; a grind of black pepper. A few thyme leaves.

It’s good: really good. Have it with buttered toast, that butter with the salt crystals, and the beads of water caught in it.